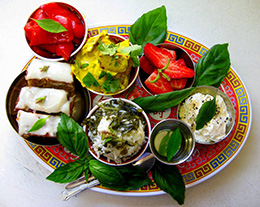 Sometimes referred to as the “kitchen religion,” ISKCON, or the Hare Krishna Movement, believes the art of cooking is a sacred experience. The preparation and eating of food should be based on principles of compassion, non-violence and balanced living. Thus, Krishna devotees advocate a lacto-vegetarian diet, strictly avoiding meat, fish and eggs.

The Bhagavad-gita further declares that one who lovingly offers his food to God according to scriptural guidelines becomes freed from sinful reactions, or karma. Stopping animal killing reduces our collective karmic debt, and thus helps alleviate the horrors of war which so plague the modern world.

More than just practicing a vegetarian diet, ISKCON members actively promote vegetarianism. Krishna devotees have authored many highly acclaimed cookbooks, including the best selling Higher Taste Vegetarian Cookbook, with more than a million copies in print. As early as 1992, Yamuna Devi was awarded the James Beard Award for Best International Cookbook for her classic vegetarian text Yamuna’s Table. And, Australian-born chef Kurma Dasa has not only authored several cookbooks, but his popular “Cooking with Kurma” series was aired on public television stations around the world.

Several ISKCON farm communities like the Gita Nagari farm in rural Pennsylvania and Bhaktivedanta Manor outside London produce cruelty free or ahimsa milk, ensuring that no cows, calves or bulls are slaughtered in the production of milk, but are instead treated with respect, love and care.