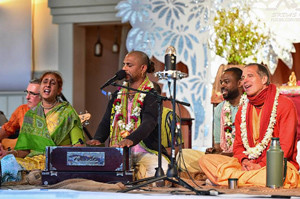 The power of sound is profound and tangible, yet also mystical. The Vedas, the ancient Sanskrit books of spiritual knowledge, prescribe invoking our original blissful spiritual consciousness through the medium of sound, a process considered especially effective for this current age. The joyous feelings awakened through the melodious glorification of the Divine are a kind of sonic theology, in which both performer and audience gradually awaken spiritual understanding of the self and the Supreme Self, or God, in ways difficult to achieve through other means.

The rich field of devotional music, the music of bhakti, has given rise to several distinct styles and traditions. The Madras Music Academy of South India puts it simply with their slogan, kanu bina gita nahi. “Without Krishna (God) there is no song.”

Kirtan, a form of devotional call-and-response chanting first popularized five hundred years ago in India by Sri Chaitanya Mahaprabhu, is practiced regularly by ISKCON devotees and has now spread around the world by efforts of the Vaishnava community.

Listen to chants and hymns by different devotees.

In kirtan the repetitive singing or chanting of mantras and other devotional hymns is accompanied by simple musical instruments. These often include traditional instruments like the mrdanga drum, kartals (hand cymbals) and harmonium (small hand-pumped organ). Yet, today kirtan has become a form of world music wherein musicians often blend traditional instruments with saxophone, bass guitar, and various forms of percussion. Often kirtan begins slowly and melodically with simple rhythemic beat, gradually building up to a greater complexity and then crescending with exuberant singing and dancing.

Kirtan is performed daily in Vaishnava temples, usually accompanying worship services called aratis. It may also be performed at home or in public. ISKCON members are seen regularly in the parks and streets of the world’s major cities performing kirtan. They do so understanding that anyone who hears the kirtan is greatly benefited, as the sound vibration gradually acts to cleanse the heart of greed, envy, lust, anger, and other obstacles to a peaceful life.

Whatever the tempo, style, or place, the music of bhakti retains the same purpose—to assist in bringing about spiritual awakening and lead us to profound states of meditation and bliss.