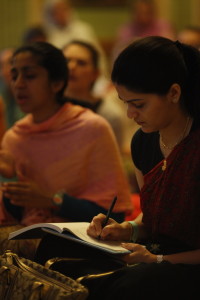 No sacred treatise, has a setting as intriguing as the Bhagavad Gita. The dialogue between the princely warrior Arjuna and Lord Krishna, the Supreme Godhead before the onset of the Mahabharata War is universally renowned as the jewel of India’s spiritual wisdom.

Paralyzed by the fear of killing his kinsmen, friends and teachers in the opposite army, Arjuna decided not to fight putting aside his social duty  as Kshatriya (warrior). Krishna, who agreed to become the driver of Arjuna’s chariot, eloquently explains him on the battlefield about His duties of  being a warrior. The conversation moves to  a series of questions and answers  about  metaphysical concepts such as soul, relationship with God, liberation, Karma Yoga ( the principle of non-attached action), Gyaan Yoga (knowledge) and Bhakti Yoga (devotion).

In translating the Gita, A. C. Bhaktivedanta Swami Prabhupada has unlocked all the secrets of the ancient knowledge of the Gita and placed them before us as an exciting opportunity for self-improvement and spiritual fulfillment. The Bhagavad Gita As It Is the largest selling edition of Gita in the Western world and translated in over 76 languages.

"When doubts haunt me, when disappointments stare me in the face, and I see not one ray of hope on the horizon, I turn to Bhagavad-Gita and find a verse to comfort me; and I immediately begin to smile in the midst of overwhelming sorrow. Those who meditate on the Gita will derive fresh joy and new meanings from it every day.”Mahatma Gandhi

The word Veda can be traced to the sanskrit word vid which means “to know” or “knowledge.” The Vedic texts contain information on varied topics: from medicine to cosmology , from techniques of yoga and meditation to explanation of lessons in governmental organisation and military protocols.

In addition, there are Upavedas (sciences not directly related to Vedic study) like Ayurveda (study of holistic medicine) and Gandharva-Veda study of music. It also included Puranas such as Srimad Bhagavatam and epics like as Mahabharata and Ramayanas.

According to the Vaishnava tradition,  this knowledge was passed down, from master to disciple in disciplic succession or parampara.