Festivals are an integral part of ISKCON. With myriad of colourful decorations, multi-course feasts, elaborate rituals, kirtans, dance and dramas, the festivals makes spiritual progress a fun-filled experience. The original Vedic flavor is thus revived, and anyone who participates in them can vouch that there is no modern day substitute for these soul-satisfying experiences.

The Vaishnava festivals dates are determined by using the lunar calendar. Therefore, dates will vary from year to year when compared to the Western, or solar calendar. 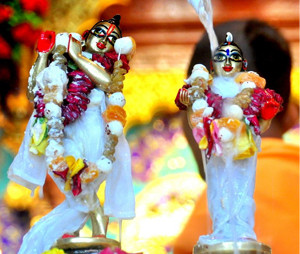 Janmastami – the birth of Lord Krishna – is one of the biggest events of the year. It is the Vaishnava equivalent of Christmas in that devotees celebrate God’s advent 5,000 years ago into this material world from the spiritual. The name Krishna means “All-Attractive.” Lord Krishna exhibits six opulences in full: beauty, knowledge, fame, wealth, strength, and humility. Thus, He is worshipped as “The Supreme All-Attractive Personality of Godhead.”

Today, Janmastami is celebrated across the globe with unparalleled grandeur at all ISKCON centers. All day performances of music, drama, dance and chanting in glorification of the enchanting pastimes of the Lord, lead up the midnight hour at which Lord Krishna appeared. A midnight service accompanied by kirtan and dancing is followed by a multi-course vegetarian feast for all. 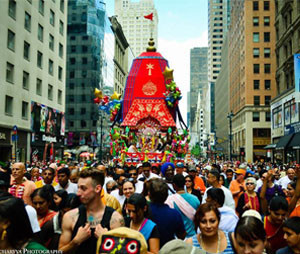 With the exception of Kumbha Mela, the Rath Yatra traditionally held in Puri, India attracts the largest gathering of pilgrims in India. During this festival, the beautifully bedecked Deities of Jagannath (Lord of the universe) , Baladev (Krishna’s brother) and Subhadra (Krishna’s sister) are taken out on three giant chariots specially constructed for the parade.

According to scriptures, even though Krishna became a great King of Dwarka, his childhood was spent amongst simple cowherd boys and girls in the village of Vrindavana. This mood of wanting to bring back Krishna to the playful pastimes of Vrindavana signifies the inner meaning of Rath Yatra. When devotees pull the ropes of the cart, it symbolizes the pulling of the Lord into our hearts. 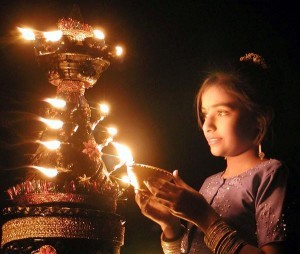 Diwali, or the Festival of Lights, marks the Hindu New Year, and is associated with many of the Supreme Lord’s pastimes on earth. Diwali is the best known of Vedic holidays and is today marked by events in places as varied as ISKCON temples and America’s White House.

For ISKCON members, this day is most notable because it marks the return of Lord Rama, an incarnation of Krishna, to his kingdom of Ayodhya, after his defeat of the evil king Ravana. Rama was welcomed by all the citizens who lit lamps or dipas illuminating the sky for his joyous return. It also marks a day during Lord Krishna’s advent when He dispatched the demoniac Narakasura.

Diwali thus signifies the victory of light over darkness and good over evil. The festival also symbolizes a time for spiritual renewal by lighting a lamp within our own hearts for spiritual enlightenment and by welcoming the Lord into our lives. The festival is often celebrated with elaborate firework displays, lighting Diwali lamps and feasting. 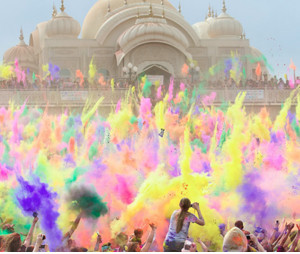 Traditionally, Holi announces the arrival of spring. It is also connected with a special pastime of Lord Krishna wherein He and his devotees playfully sprayed each other with colored water. Reenacted each year with zest, Holi is today an event that draws tens of thousands to ISKCON temples for a day of music, dance, feasting, and exuberant throwing of colors, or powdered dyes, upon all who are bold enough, or fun loving enough, to participate.